We are expecting English Setter puppies early part of March 2014 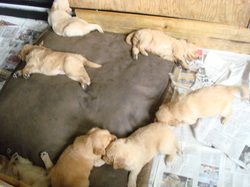 Please contact myself or McEwan Goldens for further information. 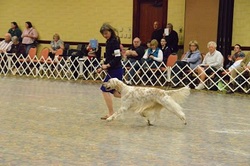 MBPIS RBIS Cdn Ch. Lentigo's Runs Like a Deer "John"
Shown here at the 2012 ESAA National In New Mexico.
The #6 2012 English Setter in Canada
with 22 Group Placements and 1 RIS all between 1-2 years old.

John is working on his American Championship.
His next show in the States is in North Carolina Mar 29-31/2013

John is available for stud to approved bitches. 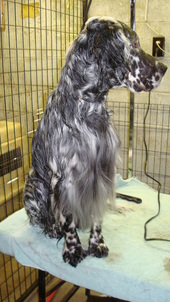 Cdn Ch. Lentigo's Driving My Heart Around "Vanessa"
Shown here getting groomed before visiting her boyfriend.

Vanessa is in season  p4 results 1.6 yesterday.
For her first litter she will be breed to a handsome Orange Ontario boy "Bart"
Wydlewood's Santa's Little Helper. owned by Garth & Karen Gourlay.

Vanessa's second litter is plan with Cathy Brewer's boy "Harrison" which will be from Frozen Semen.
Vanessa is from the "Country Litter dob Oct 20, 2010.

JUMPER to BE BREED TO JENNA

Just waiting for her to come into season.

Jumper shown her waiting for Jenna. 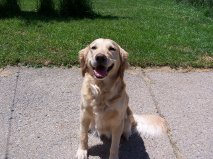 Tobygle's Too Cool for You "JENNA"

STELLA- IS RETIRED FROM THE BREEDING PROGRAM

Waiting for her next season to be breed, to a Blue Male.

CARL IS WILLING AND WAITING FOR A GIRL FRIEND

Lentigo's Buddies on the Water  "CARL"

Carl is working on his Canadian Championship and obedience.

Carl is named after our brother-in-law Carl Matchim... a great fisherman and everybodies buddy on the water.